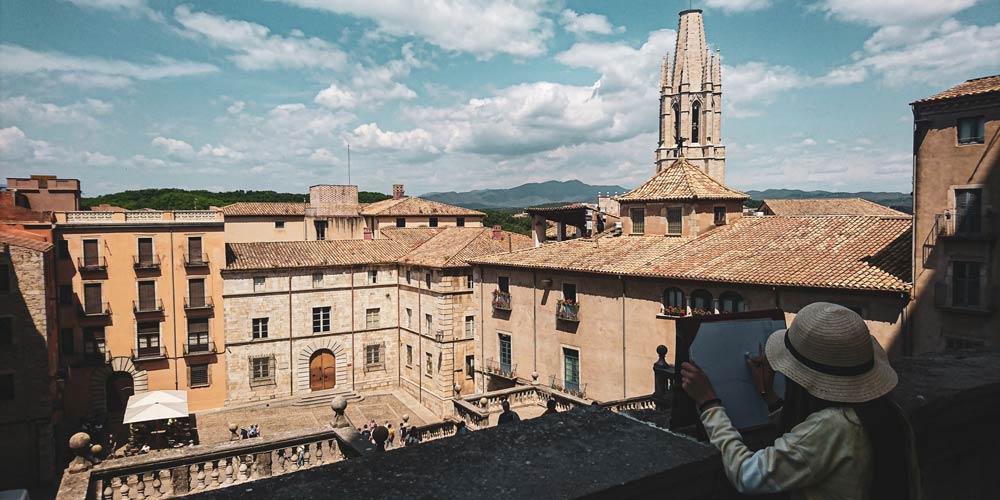 With the arrival of Easter, we want to recommend you some of the most beautiful towns in Catalonia, which, to this day, are still frozen in medieval times, still preserving their cobbled streets, their arches, the stone balconies or towers . All of them are towns full of charming corners that take us back several centuries

Montblanc is a town located in the province of Tarragona, whose origins date back to the year 1080 and which, today, preserves the largest walled enclosure in Catalonia and a walk through its streets will take you back to the Middle Ages.

You can visit its stately towers, gates, sharp walls and a Romanesque bridge that make Montblanc an epic town with a 100% medieval atmosphere, as well as visit the monasteries of Poblet, Vallbona de les Monges and Santes Creus.

The Tourist Office conducts guided tours to discover the medieval history of this town. We highlight the Montblanc Medieval Week (coinciding with Sant Jordi, at the end of April). There is a cavalry school, exhibitions of medieval trades and a fabulous representation of the legend of Sant Jordi, among other activities. In addition, there are curious museums, such as the Nativity Scene Museum, the Wine Museum or the Rock Art Interpretation Center.

If you want to discover the architectural heritage of Girona (just 30km from Girona), we recommend visiting the famous town of Besalú. The monumental importance of this is fundamentally given by its great value as a whole, by its unity, which determines it as one of the most important and unique samples of the medieval ensembles of Catalonia.

The historical origin of Besalú is a fortress that already existed in the 10th century, and today you will find corners that will remind you of the typical medieval town in which, in addition, there was a Jewish quarter.

Without any doubt, you should visit the medieval bridge of Besalú, as it is the most emblematic monument of the site with almost 150 meters in length. It was built in the 12th century. In addition, we recommend visiting the Jewish baths, the church of the monastery of San Pedro de Besalú and San Julián, a former pilgrim hospital, the Cornellá house, the church of San Vicente and the Gothic room of the Royal Curia Palace.

The beauty of its streets have turned Besalú into a film set. It hosted the filming of the third season of the HBO series Westworld, in addition to being chosen as a location for Game of Thrones or the movie Perfume.

Peratallada is one of the towns on the Girona coast that has a special charm, since all its corners are beautiful and authentic. It was declared a Historic-Artistic Site for being one of the most important and best-preserved medieval architecture center in Catalonia.

Among the most important elements, the fortress castle stands out, formed by the fortified nucleus and the keep, as well as the palace and the walls. The castle dates from the 11th and 12th centuries, although it has undergone subsequent reforms. The walls are from the 12th and 13th centuries. The great moat that surrounds the town, dug into the living rock, is surprising, since Peratallada sits on stoneware rock.

The two main squares of the town are Les Voltes, a beautiful arcaded square, and Castell, in front of the castle and the palace. Both are surrounded by narrow streets and stone houses that are very well preserved and decorated with flowers.

Outside the walled enclosure, we recommend a visit to the Romanesque-style parish church of San Esteban, which contains a Gothic tomb from 1348 inside.

As an interesting fact, there is a curious ice cream shop, Gelat Artesà de Peratallada, where they make totally artisan ice cream and it is famous for its quality and for the originality of its flavors, such as Roquefort or L’Escala anchovies.

Camprodon is located in Girona and the Pyrenean landscape of this town has great appeal for hikers and is ideal for skiing in winter. The town still preserves old castles and fortifications as part of its heritage.

It has its origin in the monastery of San Pere and in an old market granted in 1118 by Ramón Berenguer III known as the Great, and who was a nobleman of the time.

One of the greatest charms in Camprodon is its old town and its streets, many of them still with traces of the old stones, present both in the houses and on the ground. Even so, it is also interesting to visit El Puente Nuevo de Camprodon, which is undoubtedly the best-known architectural element in the entire town. Built in the 12th century, it is 66 meters long. Another very interesting place to visit is the Monastery of San Pedro (10th century) and the Church of Santa María.

The town of Camprodon stands out for its specialties in pork sausages, such as bull, sausage, ham, etc. Likewise, their cookies and marzipans are known. The biscuits manufactured by the Birba company are the best known outside the municipality.

Talamanca is a charming and very beautiful town to visit from Barcelona (60km away).

Although remains of Iberian deposits have been found, the first news of their existence dates from the year 960 when Salla, the founder of the monastery of San Benito de Bages, made a donation of land at the end of the Castle of Talamanca. Between 878 and 897, peasants from the north settled near castles and churches and repopulated the area. At that time the Castle of Talamanca and the Church of Santa María de Talamanca were founded, which gave rise to the current town of Talamanca.

This town is characterized above all by being a destination for tourism on weekends and holidays. It is a small town, but you can visit the ruins of the castle and the church of Santa María, as well as the vineyards and the natural park of Sant Llorenç del Munt i l’Obac.

Tavertet is a small town of just over 150 inhabitants but with a notable prehistoric activity, since vestiges of the Neolithic era, the megalithic tomb, the field of funeral urns and the Iberian wall were found. The Tavertet cliff offers a breathtaking panorama, which can be seen from the town’s viewpoint and represents one of the most emblematic and beautiful images of the territory.

The main architectural attraction to see in Tavertet is the Church of Sant Cristófol de Tavertet, which is part of the Romanesque routes of Osona. The original building dates from the 11th century and the current bell tower was built during the first renovations in the 12th and 13th centuries.

Another great attraction of this town are its 50 houses and the stone walkways built between the 17th and 19th centuries, which have made the urban nucleus declared an Asset of Cultural Interest by the Generalitat of Catalonia.

Tavaret has El Mirador del Pla del Castell, which is a mandatory stop, since it offers us spectacular views of Las Guilleries, Montseny and the Sau reservoir.